This Blog has been inactive since 2017. We hope to revive it soon.

Posted by Irving Hexham at 3:52 PM No comments: 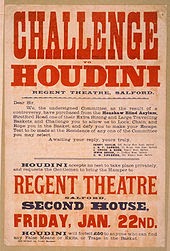 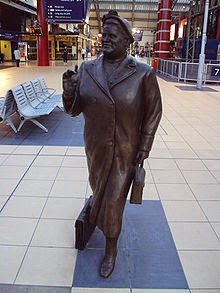 Bessie Braddock monument
Thus my life was transformed in numerous ways in a relatively short period of time. Leaving the Methodism of my childhood I became an agnostic who saw all manifestations of spirituality as a blight on society.
Posted by Irving Hexham at 8:29 PM No comments:

Visiting a Blog that has not been updated for almost a year can be discouraging. And this Blog falls into that category. The reason is quite simple: a series of family illnesses. Now, I hope, things are getting better and I can return to blogging.
Posted by Christian Reviews at 6:25 AM 1 comment:

The important point in writing about learning to use a hand held mouth blow lamp at the North Western Gas Board is the unexpected impact it had on my life. Throughout my schooling I got on well with my teachers and was generally regarded as “very intelligent” according to my school reports. But, for some inexplicable reason I did not do very well in school either in tests or essays. Therefore, my teachers concluded that I was “easily distracted" and did "not pay attention."

Yet the reality was that I did pay attention and worked very hard for poor results. Yet when it came to verbalizing things I could easily ace the exams in most subjects. The only problem was we were never give verbal exams and when it came to writing I fared very badly.

Consequently, following my 11th birthday I took the English "eleven-plus" examination and promptly failed it. Therefore, to the great disappointment of my family I went to the local secondary modern school like 95% of the population. This meant, however, that I automatically left school at 15 and had no chance of going to university.

After some months work with the Gas Board my writing and other academic skills showed fairly dramatic improvements and I began to do very well in my exams. In fact, over the next six years I became a top student. At the time this was attributed to my "growing up" and was seen as quite normal.

Years later my own son, Jeremy, experienced similar problems in school. But, although we sent him for numerous tests I tended to assume that he too would simply grow out of his inability to read and write well given time. Unfortunately, this never happened. Then, fortunately when he was almost seventeen, a family friend who worked as a speech therapist heard about some new eye tests and made the connection with Jeremy's condition.

As a result he underwent a battery of tests before it was determined that his eyes failed to focus correctly when the type of eye movement used to read was involved. This discovery led to extensive eye exercises which were carried out every day for several years. At the end of this time he could read and write normally because for the first time he could actually see what he was supposed to see.

Helping administer these eye exercises, which were designed to be done with two people, caused me to remember my time in the Gas Board’s training school because the required eye movements were almost identical to what we had to do with our blow lamps and solider to make pipe joints. The main difference was that while he had to do these exercises for half an hour a day I had done similar exercises for four hours a day for almost eight months.

Suddenly I realized why my academic work improved dramatically while I was in my first year of apprentice training. It had nothing to do with "growing up." Rather my eyes were trained to focus correctly and everything else fell in place.
Posted by Christian Reviews at 9:10 PM 3 comments:


The question “How did you make the transition from a manual worker to a university professor took me aback and caused the following reflection which I think are instructive especially in terms of what they say about so-called "learning disabilities. " So here they are:


When I left school, nobody "graduated" in those days, at the age of fifteen I began work with the North Western Gas Board in Stockport, England. The first eight months of our apprentice training was spent in a newly built training school which was run by Arthur Barton a First World War veteran and fascinating character.


We spent the mornings receiving lessons about the gas industry in a normal type of classroom. There we studied the history of gas, its manufacture, physics and chemistry. In the afternoons we went to the workshop where we were taught how to perform the normal tasks of gas fitting and plumbing.


This meant learning to work with brass, copper, iron, and lead pipes. Bending pipes involved both mathematical calculations and skill. Joining them together, adding bends and tee junctions involved soldering. Iron pipes were joined by threading and cutting them which was hard work. Joining brass, copper and lead pipes, especially lead, took a lot of skill which was acquired over several months of regular practice. 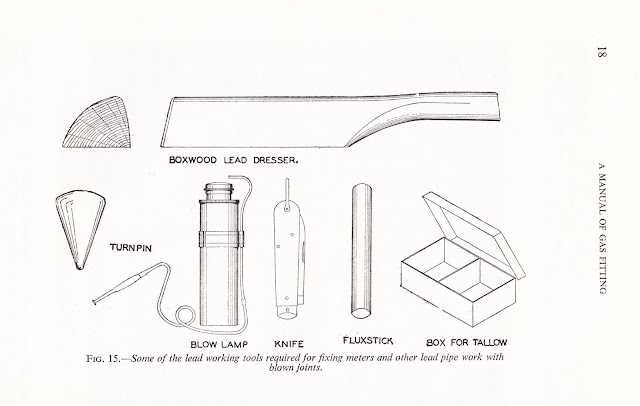 Since the workshop was kept scrupulously clean we had to be very careful how we worked and make sure that everything was cleaned each evening. Finger marks could not be left on anything and our joints had to be works of art without any solider running down the side of pipes.


Our main textbook was R. N. Le Fevre’s A Manual of Gas Fitting (London, 1958) which cost the enormous sum of £3 at a time when a very expensive book cost around 5 shillings and a the average paperback cost about 1 shilling and sixpence (at the time there were around $5 US to the £ which consisted of 20 shillings). This was our bible. To that we added The Plumbers Handbook (London, n.d.) which was given away as a free paperback by the Lead Development Association.


Although we sometimes used blow torches for big jobs involving major pipes of over 3" diameter most of our work was with ½" up to 1" pipes. And to begin with we worked almost exclusively with lead which is easy to manipulate and was used for both gas and water piping. 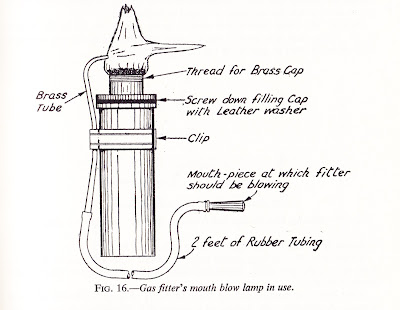 The beauty of the mouth blow lamp was that it produced intense heat that was highly focused. As a result, with practice, once could produce high quality work. In fact, it appears that this type of blow lamp is also known as the "jeweler’s blow lamp" which in the past was widely used to produce very expensive jewelry.

The significance of all of this for my academic career will be explained in my next blog.

Posted by Christian Reviews at 10:20 AM No comments: