The road to Berlin

On 29 August, 1962, a party of 19 Manchester apprentices, including several from the North Western Gas Board, two Church of England ministers and one trades union official, left by train for Harwich. From there we took the overnight ferry to the Hook of Holland where we boarded a second train for Berlin.
The real excitement began when we crossed the border into the German Democratic Republic. Once over the border the train was stopped and searched by armed guards. Then it began a very slow journey on to Berlin. Along the way was saw armed guards and watch towers at regular intervals.We also saw several groups of forced labourers working in fields where they were guarded by what looked like the army. Taking photographs was difficult because we were told that if we were caught doing so our cameras would be confiscated. To make matters worse, and add to our sense of occassion , a guard regularly checked up on us.
Our route took us through a largely rural landscape until we reached Potsdam which was the first East German town we were able to observe from our rail carriage. What we saw looked dreadful. Bombed out houses were everywhere and those that were in better condition badly needed a coat of paint and other repairs. We were not impressed.
Eventually, thirty-one hours after leaving Manchester we again crossed a border, where the train was once more thoroughly searched, to reach the glittering sights of West Berlin. What a contrast to the dreary landscape of East Germany. The first thing that surprised us were the numerous lakes within the city boundaries. The second the well maintained houses and other buildings.

In Berlin we were met at the Berlin Zoo railway station by an American Church of Christ pastor, Wesley Bourdette, who was our guide and interpreter throughout the two weeks we spent in the city. After dinner we were also given the first of a series of lectures about Berlin, the Cold War, and divided Germany. This one, by Bourdette, gave us an overview of Berlin’s history and the current situation a year after the construction of the notorious Berlin Wall.


The following day our educational tour began in earnest …
More to follow …
Posted by Christian Reviews at 8:43 AM No comments:

The impact of evangelical conversions

What most people overlook when they talk about religious conversion is its far reaching impact in personal and social terms. This point is frequently made by David Martin, one of Britain’s best known sociologists, when he says that he owes his entire academic career to the evangelical conversion of his alcoholic grandfather. Without that event the family would have remained in dire poverty with no educational or other opportunities, But, because an evangelist, Gypsy Smith, entered his grandfather’s life the fate of the entire family was dramatically changed with the result that a family at the bottom of the social ladder rose dramatically and David became a respected professor.

Something similar happened to me. As apprentices one of the first things we learnt was that if the fitter we were working with told us to “go and check that other job,” then we had to clear off for a couple of hours. What was actually happening was that he was about to enter into a tryst with the woman in whose house we were installing an appliance. Although this did not happen every day it did occur on a fairly regular basis.

After my evangelical conversion I expressed my disapproval of these adulterous liaisons. Consequently, I was suddenly promoted to a senior apprentice. This meant that I no longer assisted a qualified fitter. Instead I was sent out on my own jobs as though I was  fully qualified. This happened when the fitter I was assigned to told our foreman that my work was “just as good” as his own and that he had taught me all that he could. Therefore, I was ready to work by myself. In fact, I was probably ready for the transition which came a few months ahead of schedule. What it did, however, was boost my reputation with the management. Of course, all the folk I worked with knew the real reason – my religion was getting in the way of normal life.

A few months after my conversion another event occurred that was to have an equally long term impact on my life. Billy Graham came to England for the Greater Manchester Crusade. Knowing that my colleagues were thorough going heathens I did all I could to lure them to one of Graham’s meeting to no avail. As part of this campaign I placed stickers on my motor bike advertising the event.

Almost a year later I received notice that one of the main managers at the Stockport Gas Board, where I worked, wanted to see me. When I went to his office he questioned me about the Billy Graham stickers on my motor bike the previous year. Although I was surprised that he remembered the Crusade I admitted that it was true. He then asked me if I attended Church and I told him that I was a Christian.

After receiving what was obviously a satisfactory reply he asked me if I would like to go to Berlin, Germany, on an apprentice exchange. The reason I had been selected was that the event was being organized by the Industrial Chaplaincies in Manchester and Berlin and, as he put it, “At least you believe something even it if is an American import. So I might as well send you as one of those buggers who never goes near a church …”

More to follow …
Posted by Christian Reviews at 10:40 PM No comments:

Before my “evangelical conversion” my hobby was stage magic. That is conjuring tricks for the purpose of entertainment, not some form of occult religion. In fact, I had begun to develop a very profitable small business performing at various events such as children’s and office parties throughout the winter. At the time I could earn as much from a half-hour magic show as I earned in a week as an apprentice.

In attempting to improve my performances I came to know a local inventor of magical tricks, Normal Hazeldine who’s “Hip Hop Rabbits” was quite famous in magical circles. He was retired and he earned extra income by selling unique magical equipment which he built at his home.

Norman, whose rabbit trick can be seen in the background of the picture above, had one other great passion: scepticism. This he took very seriously. Therefore, in addition to selling me some really excellent magical tricks he lent me various anti-religious books including works by Tom Paine, Annie Besant and Charles Bradlaugh. The importance of this was that it was my first introduction to logical argument of a systematic kind. It also meant that my rejection of religion was based on argument not simple neglect. 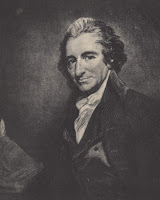 Tom Paine the author of The Age of Reason
Early in September 1960 I met a couple of very attractive young women who tried to interest me in attending the local parish church. I steadfastly refused telling them that I though religion in general and Christianity in particular was a “load of rubbish.” Undeterred one of them invited me to a meeting the following Saturday where she said I could have a “good argument” with some of her friends. Since I had nothing better to do that weekend I went along. There I discovered that her name was Judy and to my great disappointment was introduced to her fiancé Peter Heyman with whom I soon became firm friends.

Years later, after completing his PhD, Peter joined the Faculty of Theology at the University of Edinburgh where he taught until he retired a couple of years ago. Over the years our understanding of religion changed. He became an agnostic and I became a Christian. Nevertheless, we have remained good friends.

Largely as a result of Peter’s arguments I was slowly convinced of the validity and truth of Christianity. As a result by Christmas of that year I had started attending church and realized that I believed in the Christian gospel. This realization dramatically changed my life …
More to follow …
Posted by Christian Reviews at 3:01 PM No comments: