Our encounter with Berlin began in earnest on Friday, 31st August, with an early breakfast that shocked everyone present. Instead of the usual English bacon and eggs we were given bread rolls along with a variety of cheeses, sliced meat, and the best coffee any of us had ever tasted.

Then we were whisked off on a tour of West Berlin ending up at Rathaus Schöneberg (the town hall of the Schöneberg area) which was the main administrative building of the Western sector where J.F. Kennedy (1917-1963) was to give his famous "Ich bin ein Berliner" speech two years later. 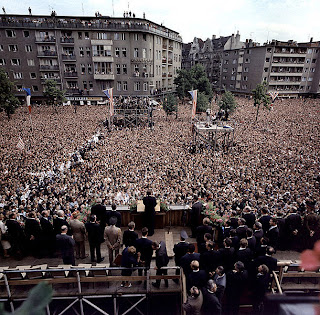 John F. Kennedy in Berlin
Credit: American Government photo.
This was followed by receptions at the Evangelische Kirche der Union (the headquarters of the Prussian Church Union which is the major protestant denomination in Berlin) in Berlin-Charlottenburg. This meeting was organized by the Ecumenical Division of the Church. At both of these meetings we were given lectures on politics and religion respectively.

The most remarkable aspect of this visit was that the Protestant Union was that I actually met my future brother-in-law. This was something I did not discover until my wife tracked down her “lost” sisters in 1995. They had been separated in 1948 by the Red Army and she was unable to trace their whereabouts until after the Fall of the Berlin Wall and the unification of Germany.

Helga, Karla's sister, Rolf her husband, and Karla
at the Berlin Philharmonic in 2001. Athough we did not know
it until 1995 we had met forty years earlier during
my first trip to Berlin - what a coincidence.

The reason I am mentioning this is that it is a good example of those remarkable coincidences that occur throughout life. In fact, my wife’s sister had moved from an East German orphanage in the 1950’s to West Berlin where she later met her future husband a Swiss citizen who worked for the Protestant Union. When we met for the first time in 1995 he asked if this was our first visit to Berlin and I said that I was there in 1962. As it turned out he was one of the people who had organized our visit and met with us. 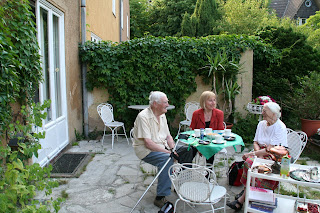 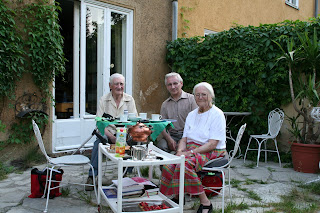 Forty-six years later, with Karla, I visited the von Hammerstein's
The other person we met at that meeting was Dr. Franz von Hammerstein (b. 1921) who spent a lot of time with us during our visit to Berlin. He was involved with the 20th of July plot against Hitler, then after the war he studied theology and played an important role in German church life by helping found Aktion Sühnezeichen (Action Committee Service for Peace) and the Topographie des Terrors (Topography of Terror) Exhibition and Foundation in Berlin.

Over forty years later I met him again when my wife, Karla Poewe, interviewed him as part of her study of post-war Germany. Once again the “coincidence” of our earlier meetings struck me.  It is experiences like this that have always made me question the neat explanations of descriptions of similar events in the Bible by Biblical scholars. They like to explain similar stories away in terms of the supposed duplication and repetition of events from different long lost manuscript traditions. Such arguments always make me feel Biblical scholars live in the very protected and unreal world of academia. In real life the most unexpected and strange things really do happen. 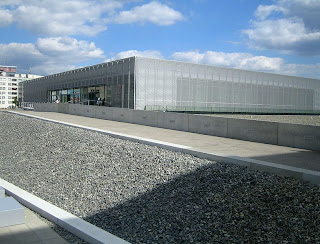