Most of us have, at one time or another, visited somewhere, or seen something, that made a profound impression on us. Then, years later we have returned to the spot full of anticipation only to find that the beautiful valley was full of disused mines and slag heaps that had marred the landscape for over a hundred years. Thus, our childhood memory of a beautiful place was more illusion than reality.

Thirty years after my first visit to Berlin I returned in June 1992. Although I told my wife that we must visit the Pergamon Museum in former East Berlin and the bust of Queen Nefertiti (1370-1330 BC) in the Ägyptisches Museum (Museum of Egyptian Antiquities) in Charlottenburg, I was deliberately subdued. To be honest, while I looked forward to seeing these sights once more my expectations were fairly low. It was, after all, thirty years since my last visit and I was sure my memories of the stunning impact they had made on me as a young man must have grown with time. Therefore, I expected to be disappointed. 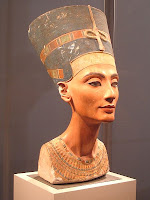 Queen Nefertiti in the Egyptian Museum, Charlottenburg
It is now housed in the New Museum on Museum Island in Berlin
Nothing could have been further from the truth. Nefertiti was exactly as I remembered her only more beautiful and intriguing than ever while the Pergamon remained equally breathtaking. History had not diminished their appeal or impact. They were, and remain, among the wonders of the world.
Two other events of that original visit to Berlin are worth coming on. After visiting the Pergamon Museum we came out and walked a short distance to the adjoining Bode Museum. On the way I took a photograph of what was clearly a military building with a large banner containing a slogan from the works of Karl Marx. 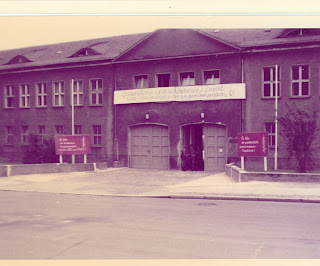 The barracks with a slogan by Karl Marx over the main doors. Two Russian soldiers are just visible. They are the ones that arrested me.
As we entered the Bode Museum two Russian soldier, with rifles slung over their shoulders appeared behind us, and I was marched off into the building to fact a Russian officer who spoke excellent English. He asked me what I was doing in Berlin and why I had photographed a military installation and whether I realized that he had the power to arrest me and send me for trial.
I told him that I was an apprentice from Manchester and on a worker exchange with apprentices from West Berlin. He asked me about my trades union membership and asked to see my passport and the palms of my hands. Once convinced that I really was an apprentice he asked why I had photographed the barracks. I truthfully told him that I did not know it was a barracks and that all I was doing was photographing the banner with Karl Marx’s name on it. 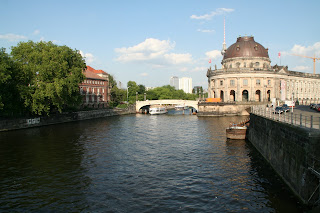 The Bode Museum on the right of the photo

Then, he spoke to the two soldiers who were still standing behind me. After that he explained that they did not understand English and he had told them that I was a “worker” who had simply made a mistake in my enthusiasm to photograph one of the great sayings of Karl Marx.
This seemed to please everyone and the officer said that he understood that I had made a genuine mistake in my enthusiasm for socialism and that while he ought to confiscate my camera he realized it would be hard for me to get a new one. Therefore, he suggested that if I opened the back of the camera to expose the film. After that I could leave. Then, to my surprise, he suggested that I “wind back” the film so that I would not loose any other photos. I could hardly believe what he was saying, but I followed his instructions and was let go. 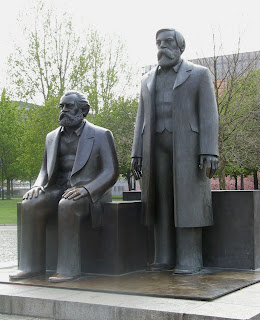 A statute of Marx, who is sitting, and Engels, standing, in the park by Alexander Platz
Once back with our group I put my lens cap on and rewound the film so that nothing was lost. As a result all of my photos, including the one of the barracks, were all preserved. Even today I wonder about that young officer who was a thoroughly decent man. Did he really think I was a socialist? Or was he a dissident who had a sympathy for the West?
Posted by Christian Reviews at 8:48 AM 1 comment: