When I began work with the North Western Gas Board my first six months as an apprentice were spent in a newly opened training school. In the mornings we received lectures on gas technology and various other aspects of the industry. The afternoons were spent in the workshop learning to bend copper, iron, and lead pipes, to wield and solder then together.

On the first day of class Arthur Barton, the head of the school, began his lecture entering the class clutching a large book. He proceeded to ask us if we knew the meaning of “scintillate, scintillate, constellation galaxy”? When none of us ventured an answer he replied “twinkle, twinkle, little star, you f***** stupid gutter snipes.” He went on "and I suppose you don't know what 'copulate' means do you? It means f******." Then he waved the book at us declaring “This is dictionary. Go out and buy one. Then read it and learn what words mean and how to pronounce them.”

At the time Barton’s admonition had little effect on me. Only after I joined Peter Downham's mid-week Bible Study did they begin to make sense. When I began to attend they were studying the Epistles of John at the end of the New Testament. At the first session I had little to say and was somewhat embarrassed by being asked to read a passage aloud. So I asked Val Grieve what the book was about and lent me a copy of William Barclay’s (1907-1978) New Testament commentary on the letters of St. John.

Barkley was a great writer and the book was a real help. The only problem was that it talked about a group of people known as Gnostics. So at the next Bible Study I contributed by making a comment on the “G-no-sticks.”

No one laughed, and my remark was taken seriously, but clearly there was some confusion about what I was saying. Afterwards, when everyone was drinking coffee and eating cookies, Peter Downing gently pointed out that my pronunciation was quite confusing and that I when I encountered a new word I really ought to use a dictionary to discover its meaning. Now Arthur Barton’s vivid lesson began to make sense and I developed an interest in words.

When I mentioned the fact that I had made a fool of myself to the gas fitter I served most of my apprenticeship with, Bass Mutch, he came up with a great solution. In his cellar he had a large collection of the Reader’s Digest which he was about to dump. So he gave them to me and suggested that I read the section “It pays to increase  your word power.” This was great advice and for the next six months I carried a copy of the Reader’s Digest with me which I read as I walked from job to job. They worked wonders and I took my first step towards becoming an academic.
Posted by Christian Reviews at 9:23 AM No comments:

The reality of class

St Mary's Parish Church n Cheadle, Cheshire, is a beautiful, old English Church which is listed as a historic building of note by English Heritage. It was built in the early 16th. century although a church existed on the site from at least the 12th. century.

The parish church was run by a minister, known as a Rector, assisted by a junior minister, or curate. It had  two daughter churches both run by curates. These were the nineteenth century St. Cuthbert's and the newer St. Phillips which was built after the war on a 1930's housing estate.

When we moved to Cheadle in 1958 we lived on the housing estate close to St. Phillips. Most of the people living around us were either upper working class or at the lower end of the lower middle class and owned their own homes. Overall the area itself was one or two notches up the social scale from places like Salford’s Coronation Street of television fame.
Although there were a number of people of my age in the immediate neighborhood they all went to the local grammar school where they studied for the English General Certificate of Education (GCE) examinations. These exams prepared the way for a white collar career or, if they went on to the advanced level GCE, and university. Those who took the ordinary level exams left school at sixteen the others at eighteen.
In our neighborhood I was the only one to attend what was known as a Secondary Modern School. To put this in perspective 5% of the entire teenage population of England went to grammar, or the even more elite public schools. Of these about half, or 2.5%, went on to university. The rest of us went to Secondary Mods. Anyone interested in more information about this ridged and highly elitist educational system should read Anthony Sampson’s excellent Anatomy of Britain (London: Hodder and Stoughton, 1962). 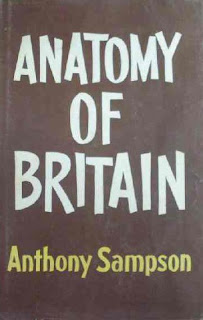 Since I had failed my eleven-plus examination when I was twelve I was expected to leave school at 15 which I did a few months after arriving in Cheadle. At that time I began my apprenticeship and settled down to a working class existence.
Then as explained in an earlier blog, when I was eighteen, I got converted and began attending church. Only one other person I knew at the Gas Board in Stockport, a Roman Catholic, admitted to going to church. All the others thought religion was dying out.
Because I was converted through the efforts of St. Mary’s youth group, which regularly ran an open air evangelistic services usually led by a young lawyer, Val Grieve, I began attending Cheadle Parish Church. The congregation was definitely upper middle class in its social composition. At the same time because I lived on the estate near St. Philips I was encouraged to go there
So I ended up attending both churches by going to St. Philips on Sunday mornings and some evenings and attending a mid-week Bible study organized by Peter Downing the curate at St. Mary’s. I also went to St. Mary’s excellent youth group of Saturday evenings and to the occasional evening service at the parish church.
To their credit most of the people of my age who attended St. Mary's welcomed me even though I was a worker and didn't go to grammar school. In particular Peter Hayman and his girlfriend Judy were especially encouraging. Only occasionally did I meet someone who make it clear that I belonged to the “lower classes” because I did not speak correct, or BBC, English. Such people thought that I ought not to attend the Parish Church and occasionally said so. 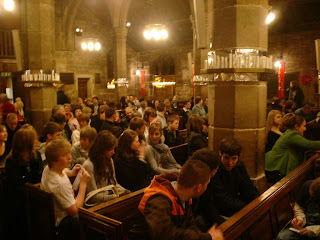 Back home to Animal Farm

Returning home to Manchester in the middle of September my life slowly began to change once more. Since the building of the Berlin Wall tensions between East and West ran high and everyone looked to Berlin as a potential flash point. Yet very few people, and certainly no one in Cheadle’s churches had visited the now divided city.


As a result I found myself quizzed about my trip to Berlin. Then a local Anglican curate, Peter Wilkinson, discovered that I had taken a lot of slides of the Berlin Wall and other places. So he invited me to show them to the church’s youth group.
This was my first public speaking engagement and could easily have been a disaster. But, because I was used to performing  stage magic I spoke with confidence and it went over very well. Consequently, I received several other invitations to speak to local Christian groups.
Although I treated my Berlin talk rather like a theatrical act there was a big difference. For the first time I had an audience that talked back and asked difficult questions. The people who put the questions to me were my age, but they read books with strange names like 1984 and Animal Farm and I was expected to compare these books to East Germany. Even worse I was asked about Boris somebody or other who had written a book they were all reading about the Russian Revolution.
To be honest I didn’t have a clue what they were talking about or how to answer most of the questions. Talking about what I saw and heard in Berlin was one thing. Answering questions about weird books was another.

Very quickly I became aware of the huge gap that existed between my own background and that of the folk I met through the church. While I was an apprentice who left school at 15 they were all the products of the elite English grammar school system. Thus while I expected to earn my living as a gas fitter they all planned to attend teacher training colleges or universities and become professionals.
Slowly it dawned on me that these people, who seemed so like myself in church and at the Billy Graham Crusade, actually belonged to a very different world where I was an outsider. In other words, although I did not realize it at the time, class differences were beginning to make themselves felt.
Posted by Christian Reviews at 6:46 AM No comments: